‘Super Malaria’: What You Should Know

Q: What is ‘super malaria’?

A: ‘Super malaria’ is a term coined by the media that refers to resistance strains of malaria which have emerged in the Greater Mekong Sub-region (GMS): Laos, Myanmar, Cambodia, Thailand and Southern Vietnam.  There is no medical or scientific term called ‘super malaria.’

A: No, it is not new. The public health and scientific communities have known about it since 2008.  However, based on recently published reports from the region, it is gaining a much larger footprint in Southeast Asia, which has everyone alarmed.

Q: What is malaria resistance?

A: Malaria resistance refers to strains of the parasite which seem resistant to the most commonly and effectively used treatments for malaria.  For many years, the World Health Organization (WHO) has recommended a two-drug therapy for simple infections caused by malaria — medications commonly referred to Artemisinin Combination Therapy (ACT).  ‘Super malaria’ thus refers to cases in the GMS which are showing resistance to ACTs, something that seems to be more common and growing at an alarming rate.

A: No, malaria resistance is not new.  In fact, malaria resistance has been around ever since we’ve figured out how to treat malaria, but we have always been able to develop newer medications or combinations of medicines to combat the resistant infections.

Q: Can ‘super malaria’ be treated?

A: Yes, ‘super malaria’ can be treated.  Health facilities in the region have already begun using a different combination of ACTs, ones that include mefloquine.  Mefloquine is a commonly prescribed malaria prophylactic for people traveling into malaria regions, particularly by US travelers prescribed by US physicians.

Q: What should I do if I plan on traveling to this region?

A: The simple answer is to continue to do all the things travelers should do when traveling into areas where there’s malaria:

Q: Is there anything else I should do?

A: Yes, you need to be aware of ‘super malaria’ if you’re traveling into a region where it’s known to occur: Laos, Cambodia, Thailand, Myanmar and Vietnam.  For the best updated information, visit the Centers for Disease Control and Prevention (CDC) or WHO websites for country-specific information on places you plan to travel.

Also, travelers going to malaria regions should consider picking up Rapid Diagnostic Tests (RDTs) and treatment medications from the local pharmacies when you arrive in country.  RDTs can be used by you to test yourself or a travel companion with a simple pin prick if you’re worried about malaria. They can also be used when returning home if you develop any symptoms for malaria: fever, headache, body aches, flu-like symptoms, nausea and vomiting.  Remember, it usually takes some time between being bitten by a mosquito carrying malaria until you develop signs and symptoms of the infection.  Picking up medications can also be helpful, as often times these treatment medications are not readily available in the United States.

Are you going to be traveling out of the country? If so, it is important to take your health into account before you leave. Many foreign countries have a high prevalence of diseases that can be easily prevented with the right vaccinations. HealthSmart Vaccines of Chantilly, VA, administers common vaccines for illnesses like influenza, but they also carry many travel vaccines for those who venture outside of the U.S.

If you are traveling to any of the following places, it is highly recommended that you receive vaccinations for certain diseases: 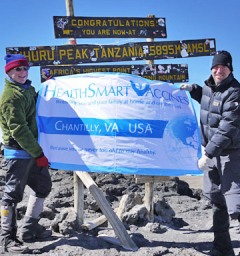 Don’t let this list scare you; traveling is a rewarding and exciting opportunity. But it’s very important to be prepared for any and all possibilities when it comes to your health. Millions of people every year travel the world and expose themselves to vaccine-preventable diseases. Those at the highest risk of contracting one of these diseases include adventure travelers, scuba divers, backcountry hikers, and people who stay in hostels. Do not make yourself susceptible to a preventable illness—get vaccinated today.

For more information on vaccine-preventable diseases, to make an appointment for vaccinations, or for information on travel insurance, call HealthSmart Vaccines in Chantilly, VA, at (703) 961-0733.

A Guide to Yellow Fever & Why You Should Get Vaccinated

5 Points to Know About Vaccines This Flu Season

Super Malaria: What You Should Know

Time To Get Your Flu Shot

Travel Vaccine Checklist: 3 Immunizations to Get Before You Go Abroad